Life in Calabar was very different to British Society. Differences included: the very different climate and terrain, wild animals in the jungle areas, local customs, superstition and witch craft, tropical diseases and aggression from some local tribes who didn’t welcome outsiders. Alcoholism was widespread among the local population due in part to foreign countries, including Britain, bringing large stocks of gin into the region for trade. Many missionaries didn’t last long, either dying from disease or being sent home ill. Earlier missionaries had been killed by local tribesmen.

Local tribes often mistrusted each other and fought resulting in loss of life on both sides. Grudges were held over long forgotten incidents and slights.

Slavery had been abolished in Britain in 1833 but was still widespread in Africa in 1876. Kings, chiefs and other powerful men had many slaves. When their owner died, Slaves would be killed to accompany him in the next world. The slave trade worldwide had damaged the Calabar region and its culture, many of its young men had been lost.

Mary found the hierarchy that assisted among the missionary community difficult to deal with at times and was relieved to have the opportunity to visit mission stations further up the Creek River where things were simpler. She began to feel that her time would be better spent in areas where there were fewer missionaries than in the well-staffed mission in Duke Town. She asked about moving further inland to work, but was told this was not safe for a woman on her own.

One of the key challenges for missionaries wanting to work further into the region was the lack of roads. Travel was either via canoe up the Calabar, Cross and Creek Rivers, or on foot for many miles through dense tropical forest and swamp land. 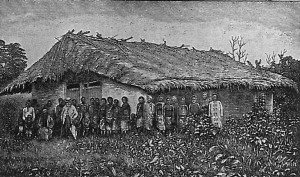 The First Church in Okoyong – at Ifako